Announcing the Class of 2020 Wilder Fellows 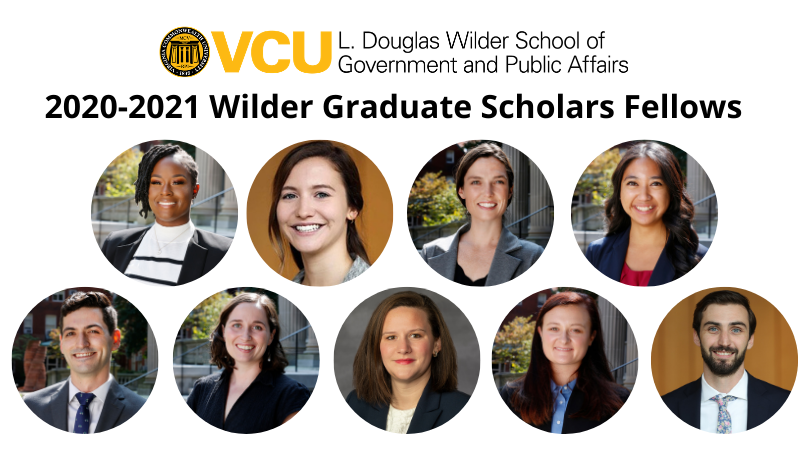 The Wilder School is pleased to announce the 2020 cohort of Wilder Graduate Scholars’ Fellowship Program which includes a talented and dynamic class of nine students from diverse backgrounds and programs.

Launched in 2006, the Wilder Fellowship has continued to serve as a valuable connection between state agencies, nonprofit organizations and the school's exceptional master’s students. This year’s cohort represent the school’s public administration and urban and regional planning programs.

“As Dean Gooden envisioned thirteen years ago as the pioneer for this fellowship, the momentum for career advancement and graduate education support continues to be significantly impactful in building our next generation of leaders in public policy.  The Wilder Fellowship has produced over 125 fellowships awarded providing funding for graduate education exceeding $2.5 million,” said Shajuana Isom-Payne, the director of the Office of Student Success, which administers the program.

“And, for our illustrious Fellows, there have been over 125 graduate degrees supported and granted. Our Fellows consistently boast the tremendous advantages that their fellowship experiences have afforded them.”

Although the delivery of the program will look a bit different in the wake of COVID-19, members of the 2020 cohort will still receive one year of tuition assistance and a generous stipend during the academic year in exchange for 20 hours of professional service with their host non­­profit or government agency. All fellows are working remotely and are attending the professional development series virtually via Zoom. Fellows will be given the opportunity to learn and apply their skills in assisting with special projects and providing program support to organizations that advance the public good.

“Although there were some initial concerns regarding agency sponsorship due to funding limitations or readiness for the virtual work environment, both the agencies and the fellows responded positively to those challenges,” said Isom-Payne.

“This year’s cohort has a 100% continuation sponsorship rate from last year’s cohort and we expanded by bringing on three first year sponsoring agencies,” added Isom-Payne.

“This speaks to the Wilder Fellowship program being a nationally recognized fellowship that provides a world class experience for both the fellow and the sponsoring agency.”

The Wilder Graduate Scholars’ Fellows are supported by the generous contributions of this year’s host agencies which include the Virginia Department of Corrections, Virginia State Board of Elections, PlanRVA, VCU RVA Eviction Lab, HDAdvisors, the Wilder Performance Management Group, Bent Ear Solutions and Virginia Community Capital.

"We are excited to welcome the 2020 Wilder Graduate Scholars Fellows! Their adaptability while maintaining the highest level of excellence in their work is admirable during this unprecedented time,” said Ashley Harrison, assistant director of student success. “I look forward to hearing about their individual contributions to the work of their agencies this academic year."

The Wilder Graduate Scholar Fellowship program is a nationally recognized and the cornerstone of the Wilder School graduate student experience. The program showcases the exemplary programming of the school’s student services units and the extraordinary student body of our nationally ranked school of public affairs. Nearly 40 different agencies have sponsored fellowships since the program’s inception.

The 2020 Class of Wilder Graduate Scholar Fellows and their host organizations include: