In 2018 Elections, Plurality of Virginia Voters Focused on Responding to Trump Administration 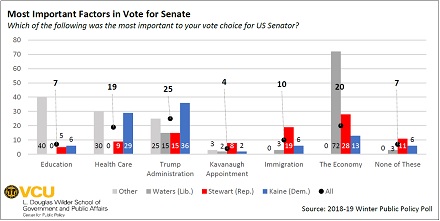 A chart showing the issues voters saw as most important in determining their vote in the 2018 Virginia Senate election. Responding to the Trump administration, with a plurality of 25 percent, led among six options.

Though President Donald Trump wasn’t on the ballot in 2018, one-quarter of voters in Virginia’s U.S. Senate and House elections say they made their choices as a response to his administration, according to a new poll by the L. Douglas Wilder School of Government and Public Affairs at Virginia Commonwealth University.

Offered a range of six issue areas, a 25 percent plurality of those who reported casting ballots in November said the most important factor driving their vote for Senate was responding to the Trump administration. A 24 percent plurality said the same about their vote for the U.S. House of Representatives, according to the Winter 2018-19 Public Policy Poll conducted by the Wilder School’s Center for Public Policy.

The poll, a random sample of 805 adults in Virginia conducted by landline and cell telephone from Dec. 3-13, has a margin of error of 4.01 percent.

In the Senate race, the economy (20 percent) and health care (19 percent) were close in importance to sending a message to the Trump administration. Despite media coverage in the run-up to the election, a smaller portion of voters saw immigration (10 percent) or the appointment of Brett Kavanaugh to the U.S. Supreme Court (4 percent) as the most important factor in determining their vote. Education, at 7 percent, trailed in being chosen as the most important issue for voters.

Reasons for voting in the U.S. House races closely mirrored those cited in the Senate race. Alongside the 24 percent who voted to send a message to the Trump administration, the economy (chosen by 25 percent) was the leading factor. Health care (chosen by 16 percent) represented another top issue.

“There was significant drama surrounding immigration issues and the appointment of a Supreme Court justice in the run-up to the 2018 election,” said Robyn McDougle, Ph.D., director of the Wilder School’s Center for Public Policy. “But these results suggest voters were focused on the White House and the bread-and-butter policy areas of health care and the economy.”

Thirty-six percent of those who reported voting for Kaine said responding to the Trump administration was the most important factor, compared to 15 percent of those who reported voting for Stewart and for Waters. Kaine voters were also motivated more by health care (29 percent) than were Stewart voters (9 percent). By contrast, the economy was much more important among Waters voters (72 percent) and Stewart voters (28 percent) than for Kaine voters (13 percent).

Similar gaps were found for those who identified as Democrat, independent or Republican.

Independents (35 percent) and Democrats (31 percent) were more likely than Republicans (17 percent) to say the most important factor in deciding their vote was responding to the Trump administration. Republicans were also the outlier in saying immigration was a top factor — 18 percent of GOP voters chose the issue compared to 7 percent of Democrats and 4 percent of independents.

In other areas, Democrats were the outliers:

By contrast, the economy was much more important among voters who selected third-party candidates (53 percent) and voters who chose the Republican candidate (38 percent) compared to Democrat-selecting voters (16 percent).

Immigration was also the most important issue for more third-party voters (15 percent) and Republican-selecting voters (14 percent) compared to those choosing a Democrat (only 2 percent selected immigration).

Differences by region also emerged for those saying a response to the Trump administration was the most important factor in their vote. At the extremes, 34 percent of the Northwest region’s responses selected a Trump response, compared to only 15 percent in the Tidewater region. Northern Virginia (23 percent), the West region (25 percent), and South Central (27 percent) fell in the middle.

For a PDF of the 12-page report, including complete question wording and detailed tables of results, go to oppo.vcu.edu/policy-poll/.

On Jan. 4, the Wilder School’s Center for Public Policy will release further poll results related to the landing of part of the new Amazon headquarters and job performance ratings for Gov. Ralph Northam and the General Assembly. A Jan. 8 release will cover issues of public safety, including gun policy, while a Jan. 10 release will examine economic development and funding for K-12 education.