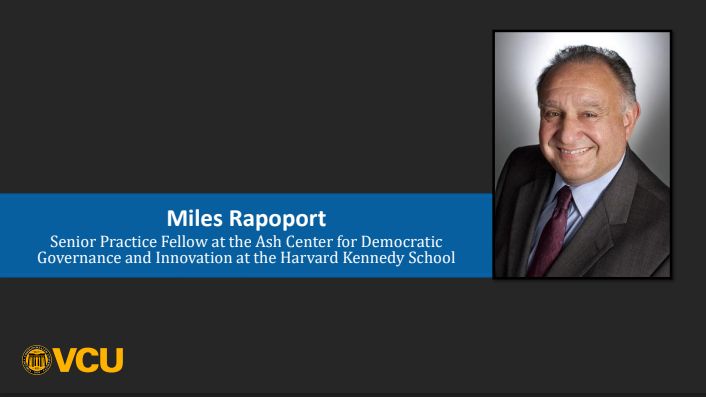 On January 19, 2022, Miles Rapoport, senior practice fellow in American democracy at the Ash Center for Democratic Governance and Innovation at the Harvard Kennedy School, led a spirited discussion based on the report “Our Common Purpose: Reinventing American Democracy for the 21st Century.”

What does it take to build an inspired and revitalized American commitment to democracy today? It’s a complicated question that Miles Rapoport tackled in an engaging discussion during January’s signature Wilder School Lunch and Learn virtual discussion.

Rapoport, senior practice fellow in American democracy at the Harvard Kennedy School Ash Center for Democratic Governance and Innovation, reflected on this existential question, and many others, through exploration of Our Common Purpose: Reinventing American Democracy for the 21st Century, a report prepared by the American Academy of Arts and Sciences. Developed through a collaboration of 35 members from across the political spectrum, the report examined the perspectives of hundreds of Americas during 50 listening sessions throughout the country. The authors recognize many challenges that threaten our collective, democratic future, and propose bold action to strengthen political participation as the nation nears 2026—the 250th anniversary of the signing of the Declaration of Independence.

View the discussion on the Wilder School YouTube channel

Building a “virtuous cycle” of democracy

“Democracy is caught in sort of a vicious cycle, which is that the institutions don't work as well as they should,” said Rapoport. “They create a certain sense of disillusionment and distrust on the part of the population. And then that, in turn, infects, I would say the political culture.”

To transition from a vicious to a virtuous cycle, Rapoport shared ideas to reduce the influence of money in elections and develop fairness doctrines to improve the quality of public information architecture in news and social media.

The report’s recommendations seek not only to improve political institutions but enhance the conceptual and pragmatic ways government functions.

“We also talked about how we might really improve civil society, and make real improvements in the political culture as well,” said Rapoport. “Because we know that democracy doesn't only happen on election day.”

Enlarging the House of Representatives, establishing term limits for the Supreme Court, developing a mandatory one year of public service for all citizens and implementing universal voting requirements are all ideas Rapoport proposed that may seem radical, but do not require changes to the Constitution. He advocates that reforms like these could be adopted by Congress, or even enacted at the local level. Such changes could help renew democracy as a whole and rebuild our national “civic infrastructure,” Rapoport noted. These are just a few of the examples proposed through 31 strategies outlined in the report.

Bold change starts with the individual

For Rapoport and his colleagues, overhauling American democracy is not an academic endeavor to place on the shelf, but a rallying call to build authentic dialogue and discussion for big ideas to stoke the flames of public discourse. He recognized that new visions for a more democratic future are vital to overcoming the “hyperpartisan environment” of national politics.

“Our hope is that some municipalities and some states will serve their function as laboratories of democracy and adopt this kind of bold and wide-ranging reform,” Rapoport said.

Virtual participants posed several questions to Rapoport, which were moderated by Sara Mogulescu, President at The Volcker Alliance, a nonprofit dedicated to advancing public sector workforces. Rapoport discussed the political and systemic routes for policy changes and the concept of holding a new “Constitutional Convention” to reform governance from both sides of the aisle. He championed grassroots public education as a key to facilitating informed debate and finding compromises.

“Take one idea that you really liked, that you think is intriguing and figure out one or two places where you can try it out and have a discussion about it, and encourage people to think differently and with open minds,” Rapoport suggested. “I think one thing that the commission really believes in is people talking to each other, trying to bridge the differences that can sometimes seem so unbridgeable and open up a real discussion of how we want our democracy to work and I'm very hopeful.”

Watch the complete presentation on the Wilder School YouTube channel