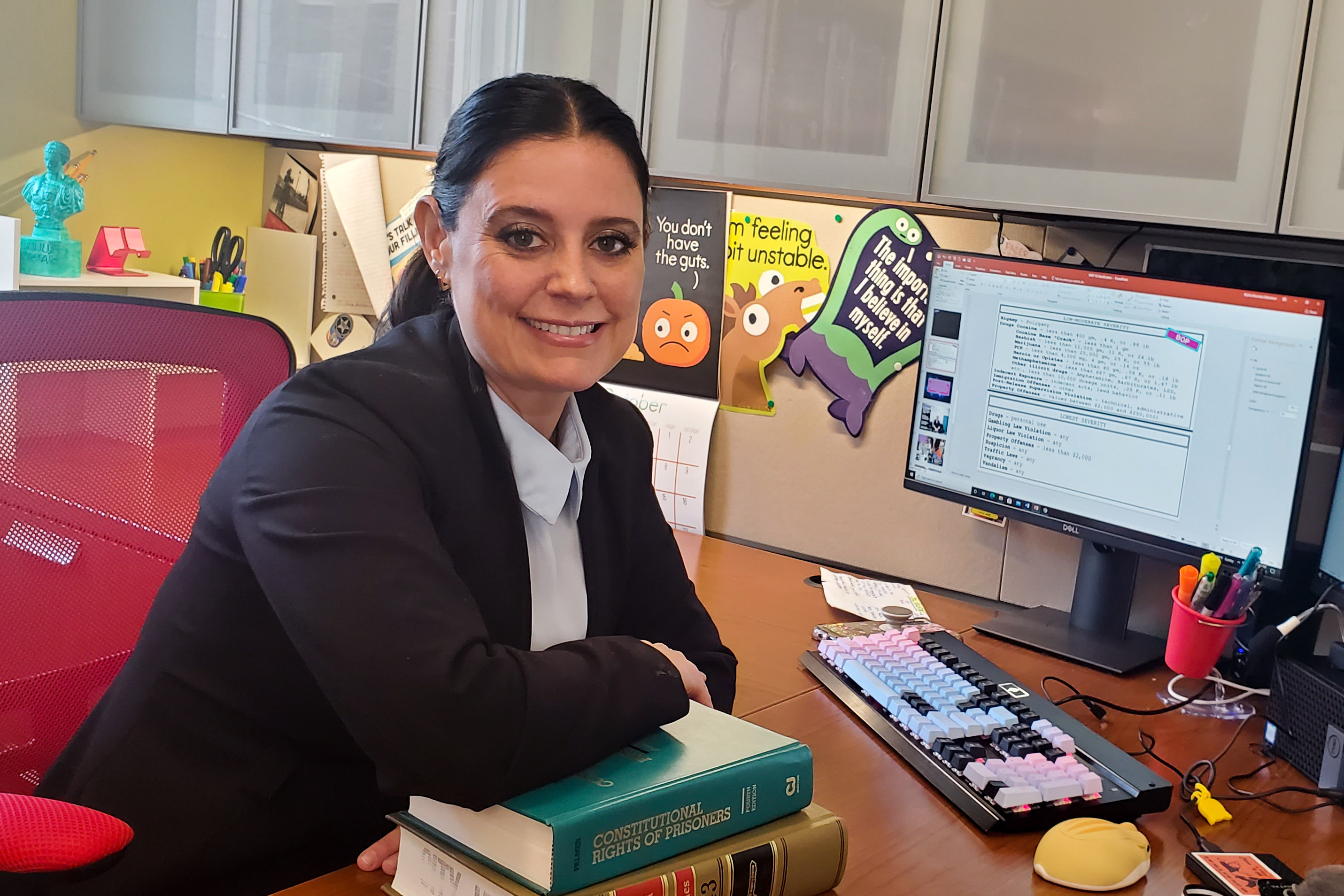 Blythe Balestrieri, PhD., and associate professor at the Wilder School, began her academic career in criminal justice after working as a prison law librarian in graduate school. Photo: David Slipher/VCU

As a second-year Ph.D. student studying interdisciplinary classics and anthropology, Blythe Balestrieri had no idea she’d soon switch fields and become an advocate for access to legal resources for incarcerated people. She was studying bones and funerary remains, working at a bone lab that consulted with forensic investigations. Balestrieri wanted more hands-on experience, and when she applied as a law librarian at Douglas County Jail in Omaha, Neb., suddenly, everything changed. “I was really interested in getting some experience working in the field and it just kind of turned my life upside down in a good way,” Balestrieri recalled.

From never having set foot in a jail, she soon warmed to a daily routine assisting pre-trial detainees navigate the legal system in an environment stripped of their most basic freedoms.

“It was very eye-opening, just how helpless people are once they become incarcerated,” said Balestrieri. “Even though they are still presumed innocent, they're really not treated any differently than other jail inmates. And it's next to impossible for them to do anything from jail.”

The experience led her to renounce her current academic track and begin a criminal justice Ph.D. program. This route would eventually lead her to the Wilder School of Government and Public Affairs as an associate professor, where she is instrumental in bringing greater court access to jail reform.

Balestrieri’s research focuses on providing essential legal information to those who are incarcerated. This comes in the form of access to the courts, which includes the ability to be informed and engage actively in one’s legal proceedings and outcomes. Without this access to the courts, it is extremely difficult for an incarcerated person to effectively participate in their own defense.

“The inmate’s ability to access the court system is really the foundation of all their other rights,” said Balestrieri, “Because if you’re not able to access the courts, then how do you ever argue that your rights have been violated?”

The basic assumption is that a lawyer will be the frontline representative for this access to the courts, but the reality is that there are often systematic barriers and restrictions along the way.

A more significant barrier can be the actual literacy and comprehension abilities of the client. According to Balestrieri, the average incarcerated individual has a fifth-grade reading comprehension.

To address these needs, Balestrieri works with sheriffs and superintendents to demonstrate the benefits of providing additional resources like law libraries, law librarians, and legal resource computer kiosks in correctional facilities. She argues that this support helps reduce legal liabilities—like the potential for violation of due process—as well as improves perceptions of procedural justice.

Not only can this access to information improve an individual’s ability to legally defend themselves, but it can also help them better understand their situation, be heard and feel that they’ve experienced a fair legal process. Balestrieri encourages corrections officials that this creates a tremendous overall effect on inmate stress, reducing day-to-day conflicts and improving the overall environmental safety of a facility.

“The extent to which inmates are anxious and upset about what's happening with their cases completely trickles over into everyday life in the jail,” Balestrieri said. “So if I can help inmates have a better day, it starts by helping them understand what they can expect with the legal procedure.”

Transforming via research, inside and out

Landing at the VCU Wilder School was a dream come true for Balestrieri, who saw the urban Richmond environment as an idyllic setting for hands-on criminal justice research. She mixed up her campus instruction with part-time work as a law librarian with the Richmond City Jail. During seven years in this role, she began offering the facility’s first law library services, updated legal research databases and even helped design the law library for the new jail.“It was very eye-opening, just how helpless people are once they become incarcerated,” said Balestrieri. “Even though they are still presumed innocent, they're really not treated any differently than other jail inmates. And it's next to impossible for them to do anything from jail.”

“Research shows perceptions of procedural justice improve if people understand what's happening, they're more likely to think that they were treated fairly,” Balestrieri said. “There's only one thing in the constitution that's repeated twice and that's due process. So I think it makes sense to be focused on fairness.”

“It was very eye-opening, just how helpless people are once they become incarcerated,” said Balestrieri. “Even though they are still presumed innocent, they're really not treated any differently than other jail inmates. And it's next to impossible for them to do anything from jail.”

Balestrieri also worked on a broader scale to effect change, thanks to the VCU Translational Research Fellows Program, which connected her with state and local policymakers interested in her expertise. At the behest of a consortium of Virginia jails and correctional facility leaders, she was able to conduct research on the efficacy of weekend jail programming and present it to the general assembly, which provided insights that ultimately helped amend and pass proposed legislation.

For Balestrieri, it all comes down to remaining curious and asking questions. Combining intellectual curiosity with experiential learning creates a recipe for success that she encourages for all of her students. It’s one of the hallmarks of the Wilder School experience. Currently, she instructs Intro to Corrections, Criminal Law and Criminal Procedure undergraduate courses.

“We really are invested in our students,” said Balestrieri. “I know every department says that, but we work really hard to maintain very good ties with criminal justice agencies here. And we very much care about those connections. There's really not anything that happens in local public safety that somebody from criminal justice isn't involved in and we value those relationships because they benefit our students. They're not going to get that anywhere else.”