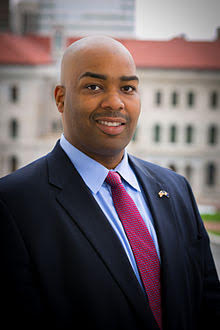 Del. Lamont Bagby of Henrico County will deliver the Wilder School’s graduation address on Saturday, May 12.

The ceremony will be held in the Greater Richmond Convention Center, Exhibit Hall A, starting at 2 p.m. Also speaking will be Governor L. Douglas Wilder, distinguished professor at the school that bears his name.

The graduate student speaker will be Mona Elrayah, who will receive her Master of Public Administration as well as a certificate in nonprofit management. She earned her bachelor’s degree in political science and sociology. For the past year she’s worked as a site supervisor with a refugee and immigrant youth program in Henrico County, and in January she shared her experiences during a TEDxYouth@RVA talk.

The undergraduate student speaker will be Kiana Miller, who will receive her degree in Homeland Security and Emergency Preparedness with a minor in Asian and Chinese studies. She is a member of Eta Lambda Sigma, the homeland security and emergency preparedness fraternity, and was president this year. She has also participated in the Army ROTC program, where she is about to commission as a second lieutenant in military intelligence.

Bagby is a graduate of Henrico High School. He earned his bachelor’s degree from Norfolk State University and Master of Education from Virginia Commonwealth University. Prior to being elected to the Virginia House of Delegates, Bagby was the Fairfield representative to the Henrico County School Board and was appointed by Governor Terry McAuliffe to serve on the Norfolk State University Board of Visitors. In addition to serving in the House of Delegates, Bagby is the director of operations at the Peter Paul Development Center.  He currently serves as the chair of the Virginia Legislative Black Caucus.

The Wilder School’s graduation is one of 37 school and departmental exercises that will take place May 11-13. All exercises will culminate in a comprehensive VCU commencement ceremony on May 12 at the Richmond Coliseum, beginning at 10 a.m.