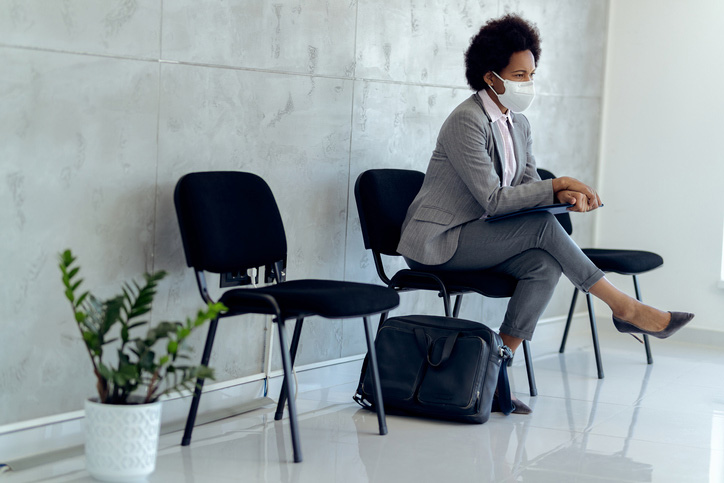 A pensive Black woman with a face mask awaiting a job interview.

A new VCU Wilder School poll shows that job loss, furlough and/or reduced hours and pay have been more common among African American and Hispanic communities.

RICHMOND, Va. (July 7, 2021) — The economic impacts of COVID-19 vary significantly based on race and ethnicity. While the majority of adults in Virginia reported that no one in their household experienced personal financial hardship in the past three months due to the pandemic, African Americans (30%) were twice as likely to report having a member of their household lose a job, be placed on furlough, or have their work pay or hours reduced compared to white (15%) respondents. Asian and Hispanic respondents reported these events almost as frequently as African Americans (26% and 23% respectively), according to the new statewide vaccine poll conducted for the Virginia Department of Emergency Management by the Research Institute for Social Equity at the L. Douglas Wilder School of Government and Public Affairs at Virginia Commonwealth University.

"The consistent differences found in communities of color show a factual divide. There is a need to improve upon the impact of race and fairness in government at the state and local levels. This poll shows how race and its relativity to education, health and employment to government needs to be addressed on a continuing basis," said former Gov. L. Douglas Wilder.

Respondents who indicated problems paying for food were most likely to live in south central (10%) or western (8%) parts of the state. They were also most likely to be African American (15%), Hispanic (11%) or Asian (10%). 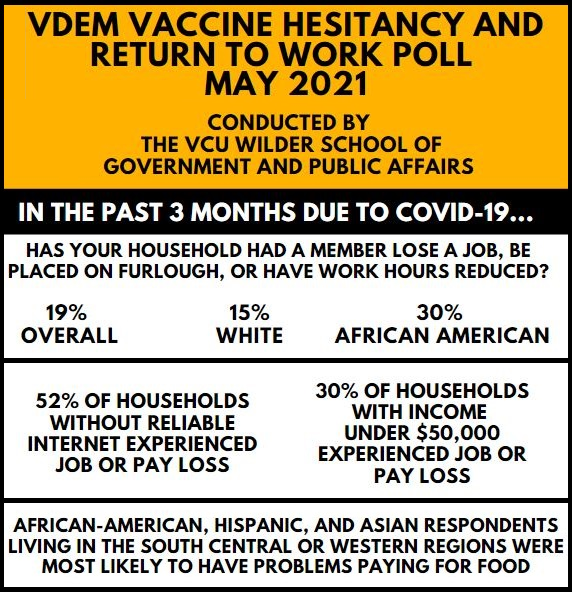 Fifty-four percent of employed respondents who previously teleworked are back at work in person in Virginia. There are several strong motivators for getting Virginians back to work in person:

African American (88%) and Hispanic (89%) respondents are most likely to return to in-person work if flexible work arrangements are offered.

A majority (61%) of Virginians in the poll support universities and colleges requiring their students to be vaccinated for COVID-19 before returning to campus in the fall.