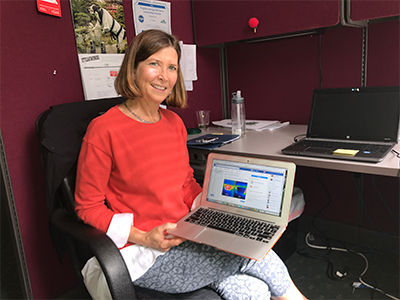 Wendy Fewster, a 2016 graduate of the Wilder School's Master of Urban and Regional Planning program, is executive director of Richmond Region Energy Alliance. The image on her laptop shows the difference an attic hatch cover can make on energy efficiency.

Wendy Fewster is energized about her job.

As the executive director of Richmond Region Energy Alliance, Fewster—a 2016 graduate of the Wilder School’s Master of Urban and Regional Planning program—promotes energy efficiency and solar power for homeowners. The alliance promotes itself as “the one-stop energy shop” that can help people conserve energy and, in turn, lower their bills.

“The biggest challenge is trying to get the word out,” she said during an interview at the alliance’s office on Carnation Street in Richmond’s Southside. “Solar power is good, but energy efficiency is key, so it’s an educational process. People might not be aware of how much energy they’re using.”

Founded in 2010, RREA matches homeowners and businesses with solar installers across the Richmond region through its SolarizeRVA program. People interested in pursuing solar power can contact the alliance, which facilitates the process by prequalifying the installer and negotiating the price, then conducting an energy and solar assessment.

Fewster, who became executive director in May, can provide a first-hand testimonial about the process: she had solar panels installed on her house in 2014 through RREA.

“Nationally there’s a lot more about solar power in the news, and awareness is coming about. Solar has reached a tipping point where it’s not a weird thing,” she said. “All the big corporations have been stating their commitment to clean energy and green initiatives. It’s good policy and good business.”

Fewster knows about good business and brings to her new position a wealth of experience.

She grew up in a military family—her father served in the U.S. Air Force. After graduating from high school in Fairfax County, she enrolled in the University of Virginia and majored in Russian studies.

After graduation, she went to work at the National Security Agency as a linguist before deciding to join the U.S. Navy, where she served as a Supply Corps officer for 22 years. During that time, she earned her Master of Business Administration from Michigan State University.  Among her many duties, she was in charge of feeding the midshipmen at the U.S. Naval Academy. She made multiple overseas deployments while assigned to ships and working in the Office of the Naval Inspector General.

In 2010 she retired from the Navy and decided to move from the Washington exurbs in southern Maryland to Richmond, where her sister lived. She was working for a small nonprofit and was interested in studying historical preservation. Fewster learned about the MURP program while doing online research, starting as a part-time student in the spring of 2014 before switching to full-time status.

At the same time, she completed the Leadership Metro Richmond program in 2015.

“It was helpful to learn more about Richmond and the challenges and strengths that face the region. It was a good complement to my work on the MURP degree, and able to give me a lot more insight on my graduate work,” she said.

Upon completing her MURP degree, she landed a part-time job at RREA, working with the SolarizeRVA program.

The Wilder School gave her a good grounding and the tools she needed for success in her new field, particularly learning about geographic information systems, design elements and doing “real-life work for real-life clients,” she said.

In the MURP program, Fewster decided to pursue a concentration in environmental planning, where her classes covered energy efficiency and solar power. That’s where she met Damian Pitt, Ph.D., associate professor and a member of RREA’s Board of Directors.

“Wendy did excellent work in both her individual assignments and her group service learning project, which explored the feasibility of community-owned solar energy projects in the Richmond region.  Later, I was her adviser for her Professional Plan project, in which she produced recommendations for reducing energy consumption in Richmond’s downtown commercial core,” Pitt said.

“We then developed a professional relationship when she began working part-time for RREA, helping to run the organization's SolarizeRVA campaign.  As a member of RREA's Board of Directors, I was among those who selected Wendy to serve as the interim executive director earlier this year.  We were very impressed with the level of initiative and creativity she displayed in her first couple of months in that role, and was happy to see the board choose to offer her the position on a permanent basis."

RREA seeks to be the trusted agent between homeowners and solar systems installers, she said. While the price of installing a solar system has dropped dramatically—and there is a 30 percent tax credit—it can be an expensive upfront cost. The bottom line, Fewster reiterated, is energy efficiency.

“It’s a matter of getting people to look at solar energy as an investment in a different way,” Fewster said.  “It’s a huge educational effort.”