Legislative Program Gives Students a Leg-up on the Future 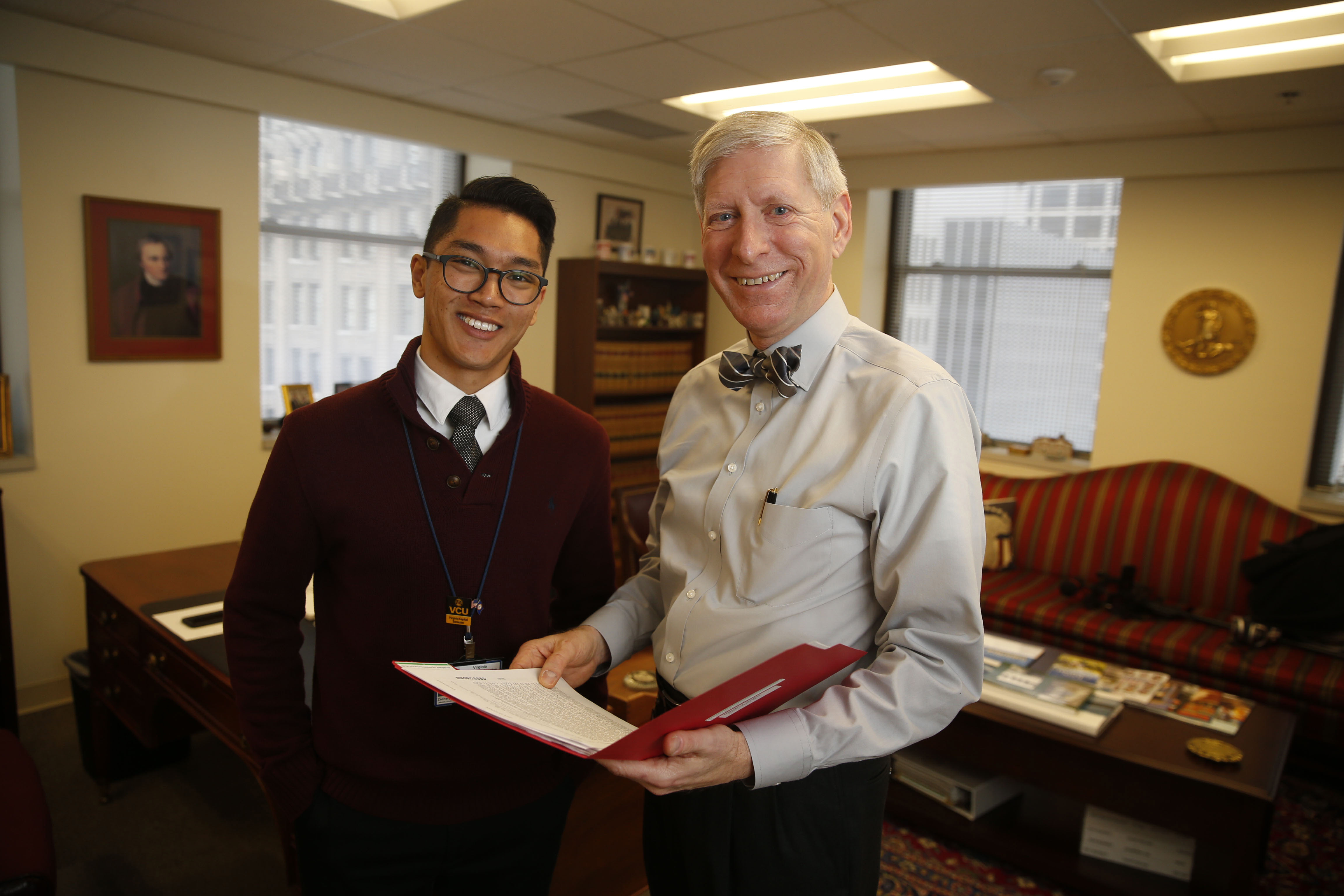 Until recently, Zach Villegas, a first-generation college student from Springfield, didn't believe he belonged in politics.

“I never thought I was outspoken enough or had a strong enough opinion about anything to be a politician,” said Villegas, a junior who’s majoring in Criminal Justice and Homeland Security and Emergency Preparedness at Virginia Commonwealth University’s L. Douglas Wilder School of Government and Public Affairs.

“The Virginia Capitol Semester helped me to figure out my future. And, it gave me the political identity to advocate for the reforms that I believe in.” - Zach Villegas

That was before a coveted internship offered Villegas an insider’s view of the recent Virginia General Assembly and the confidence to visualize a career in electoral politics.

“The Virginia Capitol Semester program really made things real to me,” said Villegas. “It helped me to figure out my future. And, it gave me the political identity to advocate for the reforms that I believe in.”

Villegas is one of 23 students from Virginia Commonwealth University who recently completed the Virginia Capitol Semester, run by the Wilder School. The program brings young men and women from colleges and universities throughout the commonwealth to the center of state government for a rigorous, behind-the-scenes experience during the winter legislative session.

Students complete the internship while continuing their studies on a full-time basis through course work at VCU. The program is bipartisan, said Shajuana Isom-Payne, director of the Wilder School’s Office of Student Success and who runs Virginia Capitol Semester.

The idea isn't to just teach about politics but how the entire political system works.

“Virginia Capitol Semester is an intense learning experience that offers unrivaled access to the Virginia General Assembly and encourages students to take their learning beyond the classroom and into the real world,” said Isom-Payne.

Not all of the Virginia Capitol Semester interns have backgrounds in politics, nor do they all wish to pursue a career in it. Some just want to know more about how policy works.

The 2018 roster of interns includes majors outside the disciplines traditionally associated with the internship, including chemistry, sociology and psychology.

For as long as he can remember, Giles has had plans to teach civics and history courses to high school students in under-served communities.

He undertook the Virginia Capitol Semester program to become a better educator.

“When it comes teaching, there is nothing that makes you more relatable to students than firsthand experience. Because of this program, I won’t have to lecture from a book. I’ll be able to say I was actually there as a part of the legislative process.” 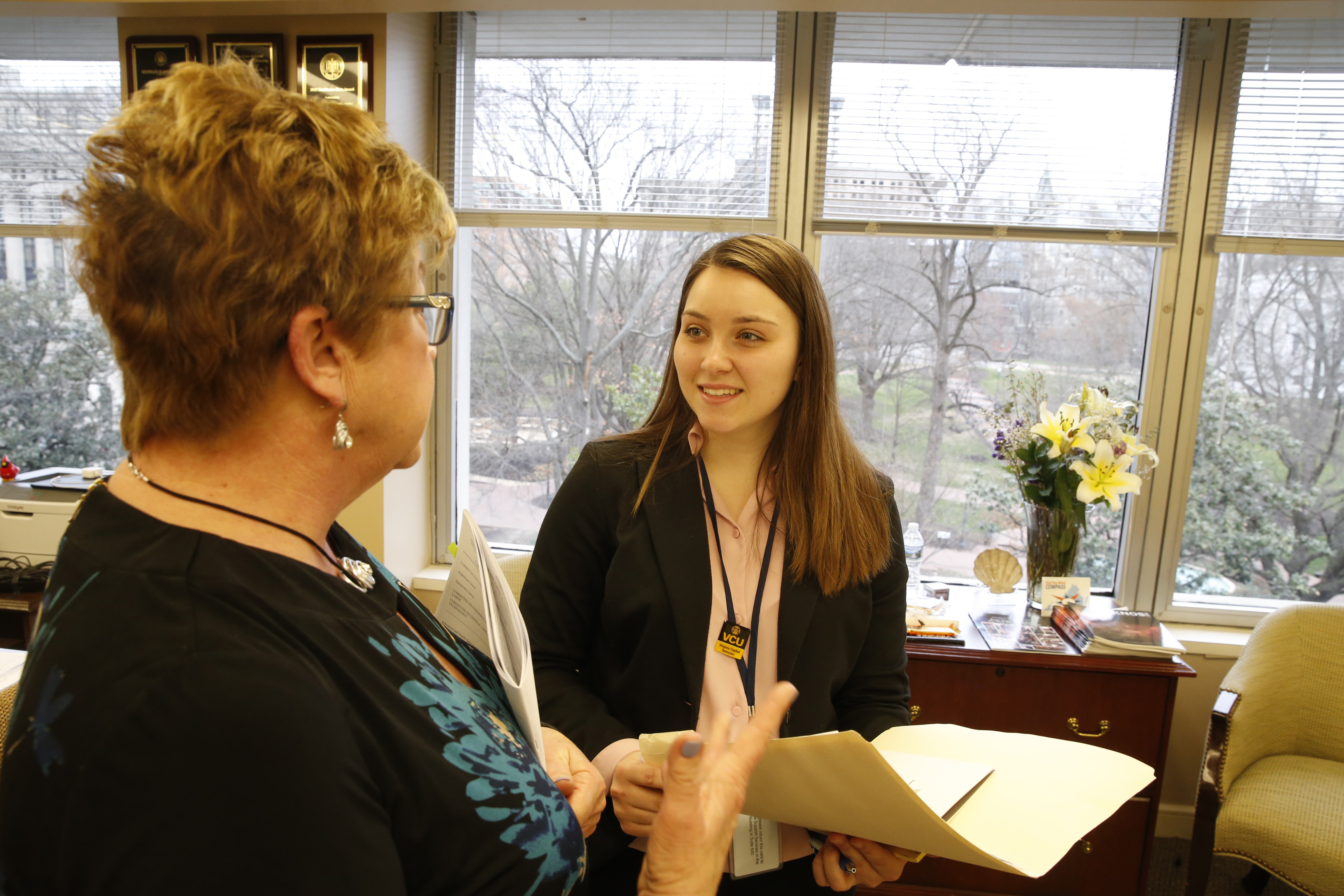 Elizabeth Dexter, a Criminal Justice and Homeland Security and Emergency Preparedness major at the Wilder School, said the chance to study while advancing her career as one of many reasons she was drawn to Virginia Capitol Semester.

Although Dexter hopes to land a federal job, the Alexandria native is confident that her internship placement in Senate Minority Leader Richard L. Saslaw’s office has given her a leg up on the future.

“No matter where I work in criminal justice—FBI or CIA—a background in policy will help exponentially,” said Dexter, “because in the end everything is policy.”

"Having the ability to talk to legislators on a daily basis, articulate policy positions to constituents and network with peers and others—these are career-making experiences that will carry me forward.”

“The Virginia Capitol Semester gave me a great deal of clarity about the political process and what it takes to make change within it...I am very proud and grateful to be an alumnus.” - Asif Bhavnagri

Landes, a VCU alumnus whose patronage of the program dates back at least a decade, described each of the Virginia Capitol Semester interns that he has worked with over the years as “bright young men and women that really seem to have not only an interest in government but a willingness to serve and actually exert some influence in the process.”

Landes was so impressed with Villegas, his most recent intern, that he has asked him back for the 2019 legislative session.

Villegas had his fair share of jobs before Virginia Capitol Semester, but was stunned to develop personal as well as professional ties. In fact, during the night of the interview for this story, Villegas departed early to attend a thank-you dinner with Landes and his staff.

“I came in from my past experiences with other internships expecting to be treated like an intern, but Del. Landes and his staff have really accepted me and helped me to develop as a person,” he said. “It’s been kind of nice finding family in Richmond.”

While not every intern can expect to develop close bonds through their placement, several have used the Virginia Capitol Semester as a launching pad for careers in government and legislative offices.

Virginia Capitol Semester interns have landed fellowships in the governor’s office, others with Virginia senators and house members and major political parties.

Asif Bhavnagri, is a policy advisor to Brian J. Moran, Virginia’s Secretary of Public Safety and Homeland Security, and a 2011-2012 alumnus of the Virginia Capitol Semester.

He fondly remembers his placement in Del. Charniele Herring’s office and the indelible instruction he received from former gubernatorial Chief-of-Staff William Leighty.

Bhavnagri worked for the former Democratic Whip during a time of intense debate in the assembly. During his tenure at the General Assembly, Virginia passed two of the most controversial anti-abortion bills in years, despite numerous public demonstrations and objections from Democrats.

“It was such a unique time,” recalled Bhavnagri, who went on to serve as a Field Organizer and Press Assistant to former Gov. Terry McAuliffe before being promoted to his current position.

Despite the tumultuousness of the period, Bhavnagri described the prevailing note of his Virginia Capitol Semester experience as one of hard work and preparation.

“I would say that that the Virginia Capitol Semester gave me a great deal of clarity about the political process and what it takes to make change within it. Interns receive a framework for the nuts and bolts of what legislators do—whether it’s reading their electorate, developing a legislative platform, framing their positions for debate,” he said. “It really is an intense primer on the policy process. I am very proud and grateful to be an alumnus.” 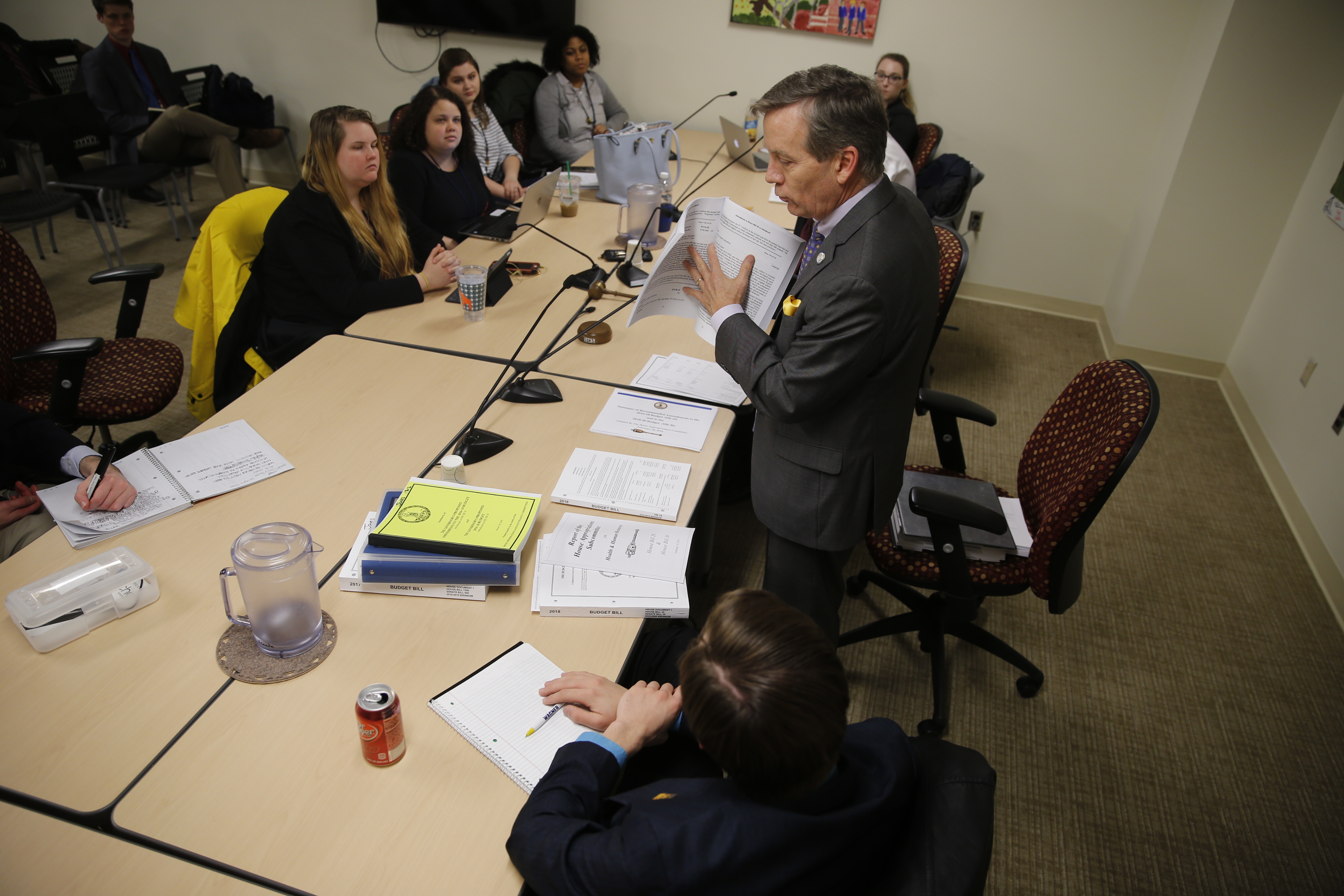 Virginia Capitol Semester students meet with House Appropriations Chairman S. Chris Jones to discuss the finer points of putting together a $115 billion government during a seminar on February 19. 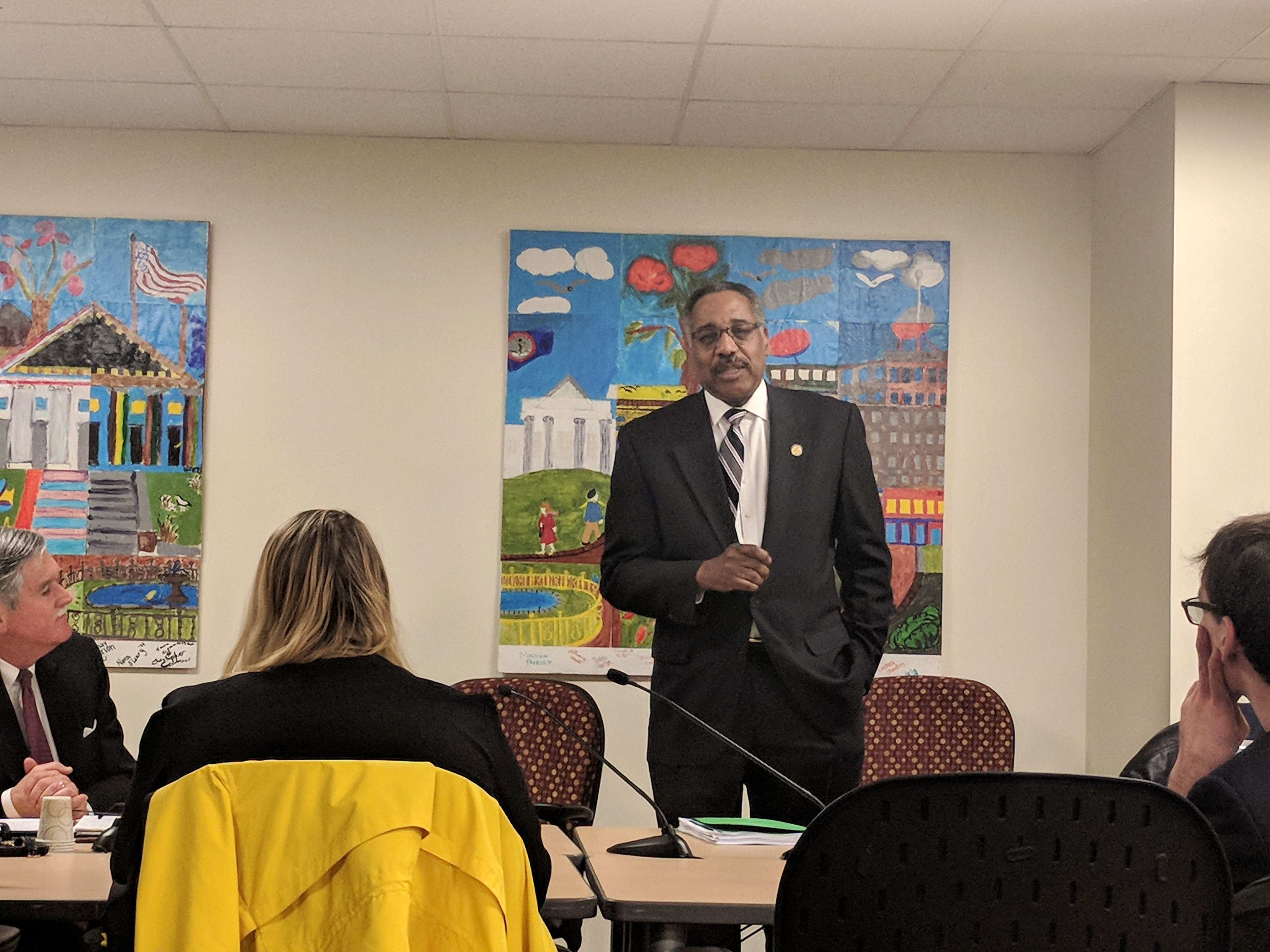 Del. Matthew James discusses his former career in marketing and workforce development during a seminar with Virginia Capitol Semester students on February 19. 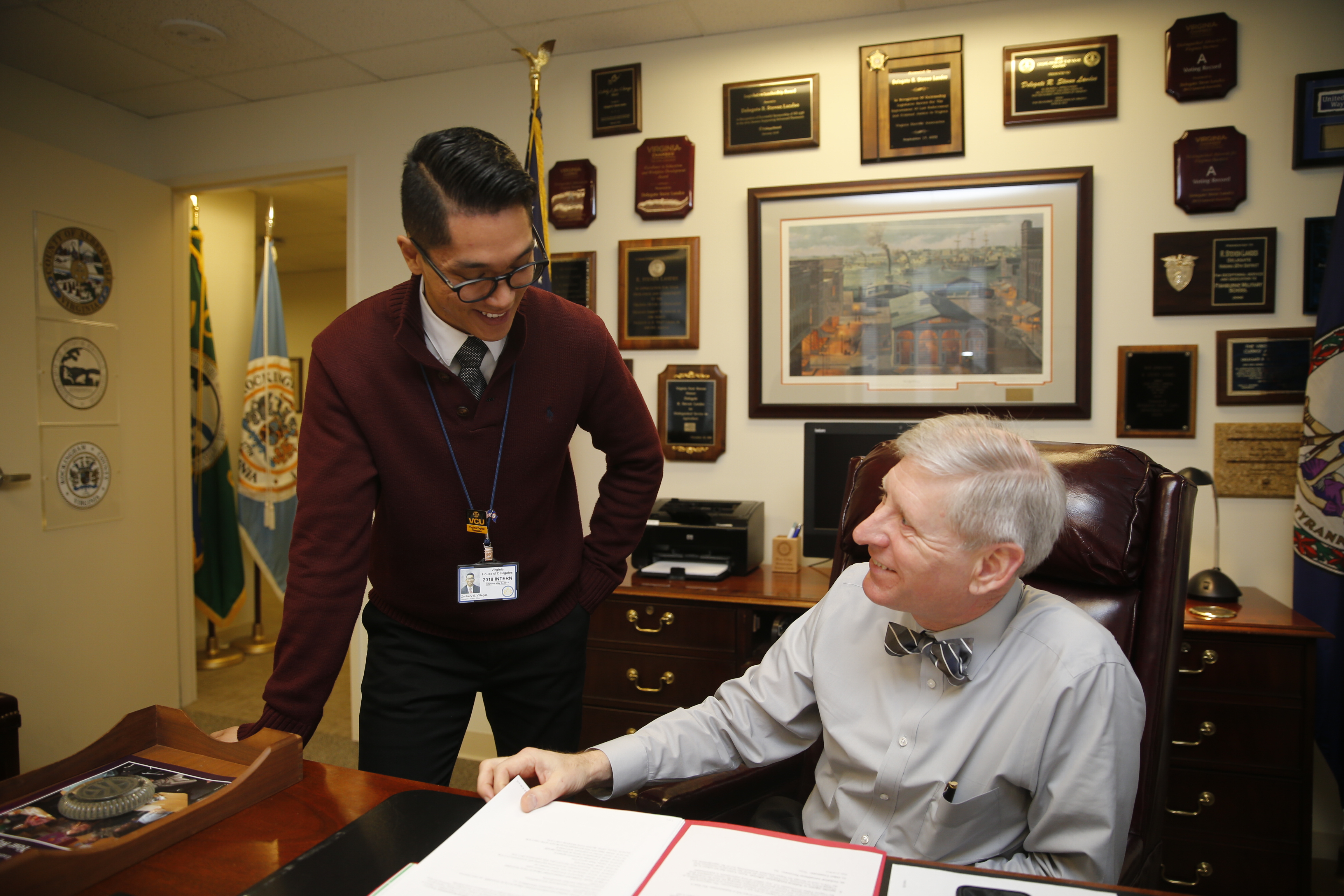 Zach Villegas meets with Del. R. Steven Landes at his office on February 19. 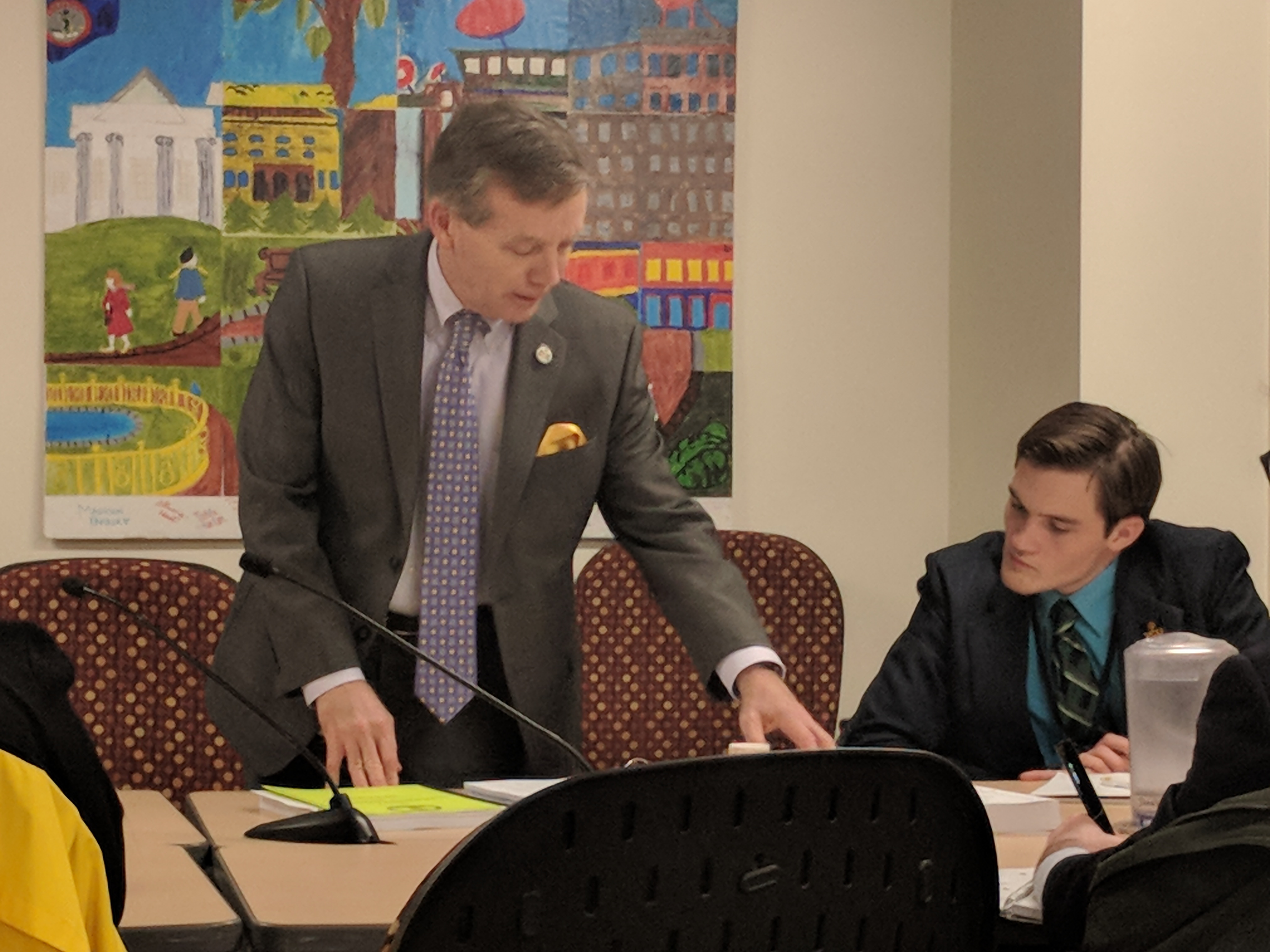 Students meet with House Appropriations Chair S. Chris Jones to discuss the finer points of putting together a budget.